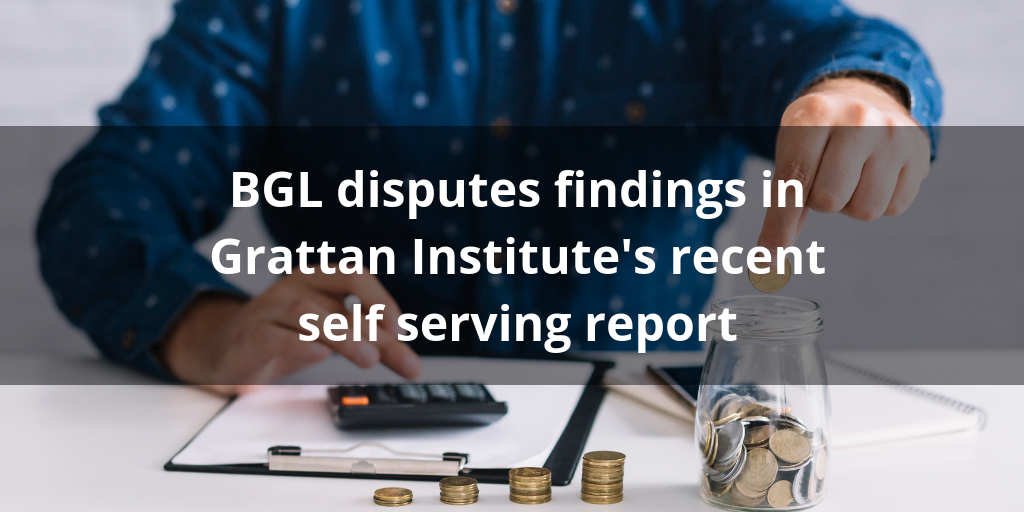 BGL is concerned about flaws in the recently released ‘Money in Retirement: More than Enough’ Report published by the Grattan Institute.

“Reading the report, you get the idea that Australians are not allowed to accumulate wealth” said Ron Lesh, BGL’s Managing Director. “This report is jaundice from start to end”.

“The Grattan Institute just doesn’t get it”, says Lesh. “Grattan seems to want everyone to be poor in retirement or rely on government handouts – maybe this fits their view of the world – but it is not the way most Australians want to live – they want to put away enough to have comfortable retirement – not a mere existence as Grattan suggests”.

“All the serious modelling by the retirement industry tells us 9.5% super is definitely not enough, 12% is closer to the mark, but really 15% is what is required to give Australian’s a comfortable retirement” noted Lesh. “Grattan would rather Australians get a handout from government or pay more tax for our governments to blow on farcical projects so they can cry poor when pensions need to be paid”.

“You can’t expect that every person will save money beyond compulsory super contributions, salary sacrifice or be able to buy a house before retirement age. So, when you launch a report like that you need to be careful not to give false hopes that everything is under control, when in reality it is not”, added Lesh.

“Plus, I honestly don’t get how Grattan can suggest 40 and 50 year olds who don’t have super will have an income in retirement of at least 70% of their pre-retirement earnings. For this to happen in real world, workers would need to compulsorily contribute at least 15% to superannuation AND develop a serious non-super saving plan” Lesh said.

“We have had so many changes to super over the past 5 years it is about time governments stopped seeing super as their money – it isn’t” Lesh added. “The government needs to leave super alone so Australians can save for a comfortable not subsistence retirement (as suggested by Grattan) with certainty”.