By BGLCorpDecember 1, 2021December 6th, 2021In the Media, News, SMSF Adviser
No Comments 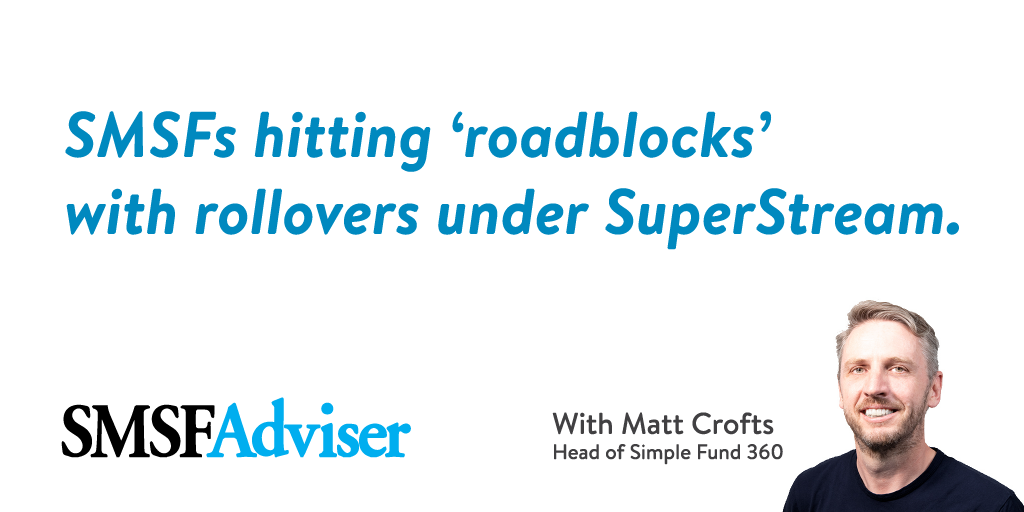 While the SuperStream measures have been in place since 1 October, there are some common issues impeding the rollover of money in and out of SMSFs, said an SMSF software provider.

From 1 October this year, SuperStream measures began to apply for rollovers and release authorities for SMSFs, with SuperStream now playing a much greater role in the sector.

While BGL head of Simple Fund 360 product Matt Crofts said that in the long term, the new payment standards would result in a more streamlined and standardised system between APRA-regulated funds and SMSFs, there are still some practical issues that are causing SMSF professionals and clients to be become unstuck.

One of the real sticking points, Mr Croft said, is with newly established funds. It’s important that SMSF trustees are notifying the ATO when establishing the fund, he explained in a recent SMSF Adviser Show podcast.

“It’s not just registering the ABN; it’s also going onto the ATO portal or getting the trustee to update the bank details when they’ve actually obtained them,” said Mr Crofts.

“The reason you need to update the ATO is because when you do a rollover, the APRA-fund or SMSF transferring the money will need to check the records to make sure the fund is complying, that it’s got bank account details and the member’s TFNs are correct.”

The other big challenge, he explained, is that the bank account needs to be in the super fund’s name.

“We’re not just seeing instances where the bank account details are missing. Sometimes the refund from an SMSF annual return is not in the super fund’s name, and it is in the individual’s name or the trust account of the firm,” he said.

There is also a range of roadblocks that SMSFs are hitting when trying to roll money out of the SMSF, he said.

One issue, he said, is where people have slightly different names with the ATO in an APRA fund scenario compared to when they are lodging their individual return.

“So we’ve seen a little bit of mismatch in that space, so it’s important that the SMSF trustee or their planner or accountant communicates with the APRA fund,” he said.

Speaking in the same podcast, Smarter SMSF chief executive Aaron Dunn said a lot of the issues all revolve around verification.

“So, if there is married name change, then making sure that it’s been updated in MyGov so that that stuff marries off, that it matches what the ATO has on its records [is important],” he explained.

“Even little things like if the rollover is going out and you set a particular amount that that rollover is supposed to be, then make sure that your banking transfer will allow for an increased limit for that money to go out because those things have to match off for the transfer to actually be accepted on the other side as well.”