Labor’s Trust tax to hit 200,000 small businesses – you are probably one of them. 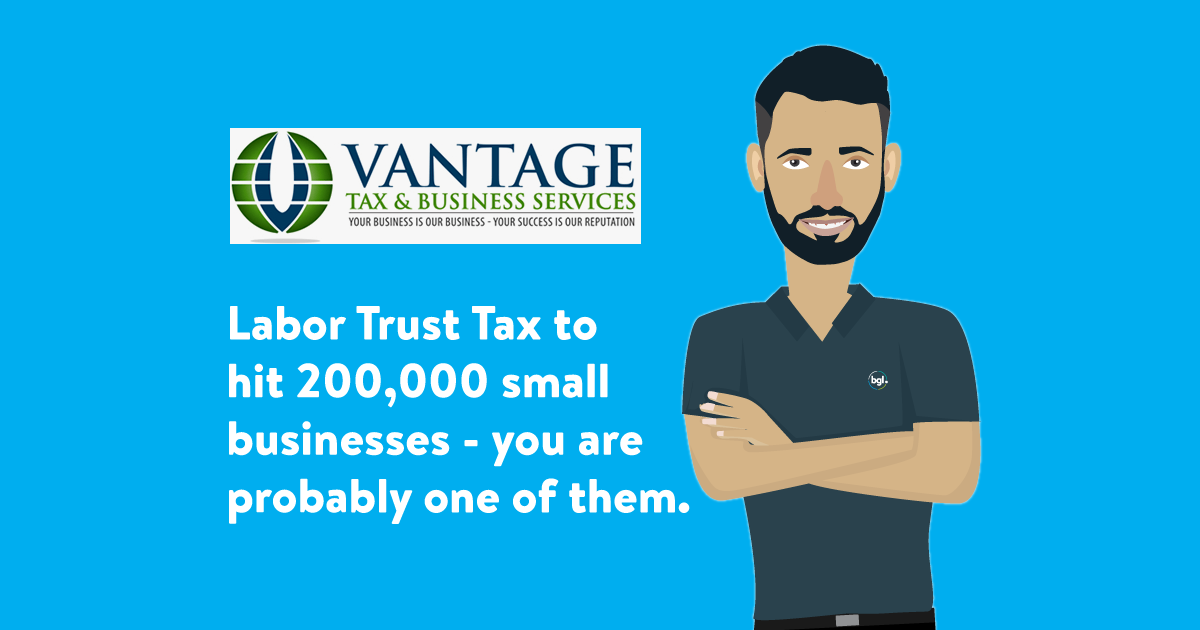 Danny D’Astolto, Partner at Vantage – Tax & Business Services in Kew provided this letter to his clients to educate them on the proposed changes in relation to Trusts. Very well articulated and simple to understand. Feel free to share if you deem it to be appropriate.

Recently, the opposition leader and opposition treasurer announced measures that they would seek to implement if they formed government in the next election. It got a little bit of media attention but not enough in our opinion. In a nutshell, they want to tax Family Trusts at a minimum of 30%. Currently, trusts don’t pay tax, but the individuals that share in its income pay tax. So this notion that Trust’ are some form of massive tax avoidance vehicle is utter nonsense.

The opposition want us to believe that only the wealthy exploit trusts. Strangely though he also admitted that 200000 of 315000 affected trusts would be SMALL BUSINESS. In our database alone, 70% plus of small business clients would be adversely affected…these are regular people, not the super rich.

This proposed measure is ill conceived and not thought through properly. All our clients that operate via trust’s, pay their fair share of tax. Shorten gave an absolutely ridiculous example where a hard working nurse cant split her income, but someone in a Trust can. Here’s a newsflash Mr Shorten, just because you have a trust, it doesn’t mean you can legally & automatically split your income. It’s been nearly two decades since the Government introduced measures to stop people splitting their income via a trust. But of course, not one word about that and interestingly it seemed the Government had no clue either. Generally, only a genuine business can split income. So you may have an IT consultant working for labour only and only working for say Telstra. They may have trust, but the laws will prohibit them from splitting income and any income earned via the trust will be taxed in that individual’s name at normal tax rates. There is no minimisation or avoidance due to the existence of the Trust.

Let’s be very clear about this. If this measure ever saw daylight in its current form, most people in business, using trusts would be worse off. Take this example. Bill & Jodie both work for an employer and earn $ 70000 each. Tax payable is around $ 15700 each, so $ 31400 in total. So a combined net income of $ 108600 Then we have Peter & Mary that run a Printing business 6 days a week via a trust.

We are struggling to see how this measure is solely out there to “get the rich” to pay more tax, when everyday small business can be thousands of dollars worse off. This measure is designed to raise $ 17.2 billion in tax over 10 years, and we have a pretty good idea where that is coming from – mainly small business.

If you want to “chase the rich” then do so with some better thought out policy, rather than dragging down the vast majority of the small business community.

So don’t be fooled by the media or the opposition that this is a measure for the wealthy only. If you operate via a trust, you will be impacted and more likely in a negative way.

This is your reward for sticking your neck out every day in business, having your house mortgaged to fund the business, waiting to get paid, dealing with staffing issues and competing in what is already a difficult environment.

So we urge all small business operators utilising Trusts to not let this proposed measure go unnoticed come election time.