Anyone but Daniel Andrews! 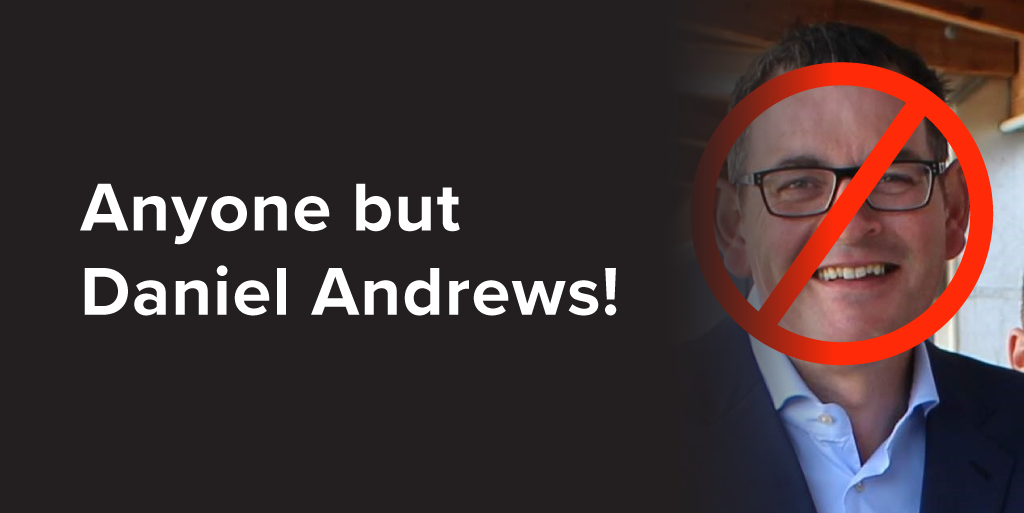 I don’t like politicians. With most, you know when their mouths are moving they are simply lying and spinning. But Daniel Andrews is unique. He has his own cult.

But what we should really do is look at his record – and his record is crap.

So let me remind you

1. World record COVID lockdowns
2. Responsible for the deaths of 801 Victorians and forgot all about at the Coates inquiry
3. Used rubber bullets to control citizens protesting lockdowns
4. Arrested a pregnant woman in front of her children in her home for a Facebook post (and then dropped the charges 2 years later)
5. Locked children out of playgrounds
6. Locked children out of schools
7. Stopped Victorians returning home from interstate
8. Imposed ridiculous mask mandates – even wearing a mask when outside by yourself.
9. Largest state debt of any Australian states – bigger than NSW, Qld and Tas added together.
10. Highest taxes of all Australian states – payroll tax and land tax are just mind boggling
11. Subject of numerous IBAC inquires – how many ? Don’t know how many because it all secret
12. Destroyed the Victorian hospital system
13. Destroyed the 000 emergency call service
14. Destroyed the City of Melbourne
15, Provided a sweetheart deal for fire fighters destroying the CFA
16. Refused to build a road and cost Victoria $1,2b dollars
17. Employed 100 people at taxpayer cost to run his twitter account
18. Created a public service employed on woke not skills
19. Supported the second most incompetent inexperienced Chief Health Officer (only Queensland did better and they disposed of thier’s
20. Signed up to the Chinese Belt and Road Program directly against the advice of Australian security services
21. Banned gas exploration contributing substantially to high gas and electricity prices
22. Introduced employer manslaughter laws that his mats would not apply to him
23. Complicit in Labor red shirts scandal
24. Complicit in Labor party branch stacking
25. Removed 70+ level crossings – shame this was billions over budget and usually not in Liberal electorates.
26. Presided over the most corrupt government in the history of Victoria

Should you support a person with the character of Daniel Andrews ?

This is the question every Victorian must ask him or herself – is this the type of person you want to reward ?

Let me also remind you about Dan’s useful idiots who sold out the people of Victoria time and time again. Fiona Patten, Andy Meddick, Rod Barton and The Greens. Put these people last on your Upper House Voting Paper especially Rod Barton who sold out Victorian’s with the new pandemic bill. We need people with integrity in the Upper House – not these clowns.

So, I’m not saying vote Liberal. I have little time for the non Liberal woke Matthew Guy. But what I am saying is: