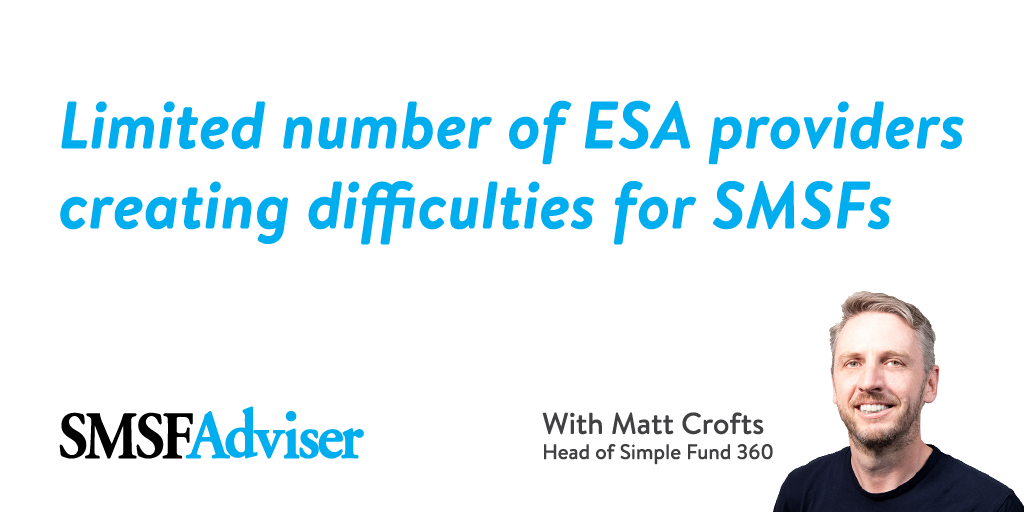 The small number of SMSF messaging providers currently offering rollover services is creating challenges for SMSFs in some instances as funds attempt to comply with the new SuperStream standards.

Speaking in a recent podcast, BGL head of Simple Fund 360 product Matt Crofts explained that while the latest SuperStream measures for rollovers and release authorities will result in a more standardised and streamlined system, one of the challenges being encountered by some SMSFs is the fact that many institutions are no longer SuperStream providers.

Under the new standards, SMSFs are required to get an electronic service address (ESA) from an SMSF messaging provider or SMSF intermediary in order to receive SuperStream data.

Mr Crofts explained that SMSFs need to ensure that the ESA provider can support rollovers for SMSFs.

With the newest SuperStream standards requiring an 18-month software build for BGL, this latest version of SuperStream, he said, has seen many institutions drop out as SuperStream providers.

“When SuperStream first started, which is going back around five or six years ago, there were close to almost 40 SuperStream providers and slowly they’ve realised its a tough game to be in terms of compliance and keeping up to date [with everything] and there’s very little way to charge for that,” Mr Crofts explained.

“I think around half the providers that were in there dropped out … and this latest round of SuperStream requirements were huge so it may have halved again.

“[In some cases], people are not aware of them dropping out or they’re not receiving correspondence because some of that correspondence might be going to the trustee and not the accountant who are really the ones initiating a lot of the rollovers.”

Speaking in the same podcast, Smarter SMSF chief executive Aaron Dunn said becoming a SuperStream provider was initially a more enticing business model because it was mainly dealing with inflows into an industry in the form of contributions.

“So, financial institutions were more than accommodating to be able to put these things in place because it meant they were getting cash flows into their cash accounts,” said Mr Dunn.

The landscape is now very different, however, said Mr Dunn, especially given the level of development required for the latest version of SuperStream.

“I’ve seen discussions on the notion of people going to look for an ESA and trying to find a free ESA so they can do things [but] those days are arguably over,” he said.

This leaves the major SMSF software companies such as BGL, Class and SuperMate as the only ESA messaging providers on the ATO register that can currently provide SuperStream rollover services for SMSFs, with Australia Post still working on finalising its offer.

DBA Lawyers director Daniel Butler said this poses an issue for SMSFs that are not on these software platforms, as they are unable to undertake a rollover that is compliant with SuperStream.

“The ATO’s position is that unless the SuperStream rollover process is followed, a significant administrative penalty (currently $4,400 per trustee) may be imposed, the fund may be rendered non-complying and auditors are encouraged to lodge an auditor contravention report to the ATO, which may give rise to costs and inconvenience,” explained Mr Butler.

“In short, there is currently no workaround to the SuperStream system and significant penalties and risks for those funds that seek to bypass the system.”

This is creating a “very difficult situation” for numerous SMSFs who have pressing needs to complete SMSF to SMSF rollovers, said Mr Butler.

“I am aware of several SMSFs, for instance, that need to settle on property and investment acquisitions who stand to lose considerable sums and costs for failing to settle on time. Some of these funds are now having to consider other alternatives like limited recourse borrowing arrangements to make sure they are not at risk,” he explained.

Mr Butler noted that the ATO may however look to take a practical approach and not enforce compliance until there are more ESA providers.