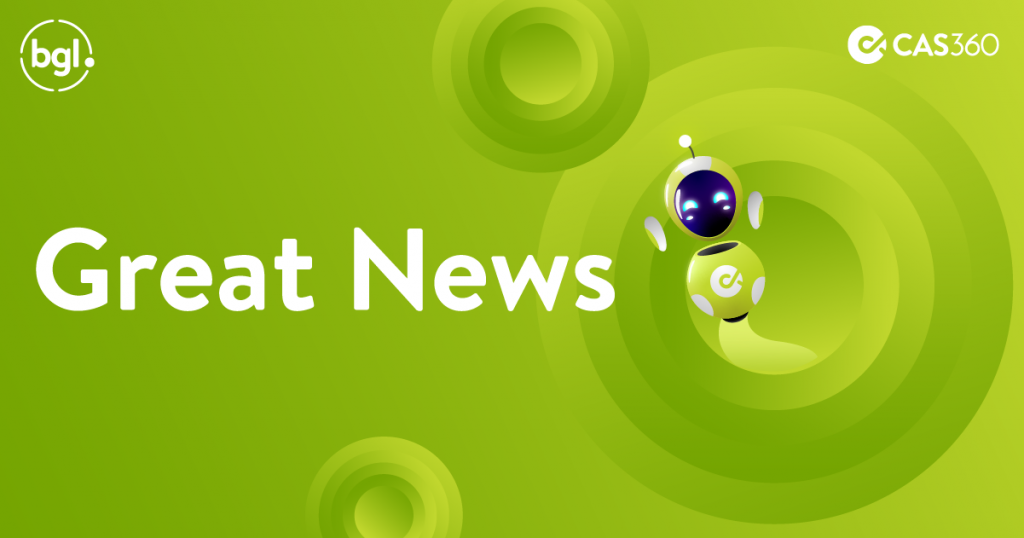 For the March 2021 release of CAS 360 we have completed our beta development for CAS 360 in Singapore, and we are very excited to be putting CAS 360 in the hands of a number of beta firms in Singapore.

CAS 360 Singapore has some amazing features, never before seen in Singapore. CAS 360 is approved for electronic filing of the Singapore company annual return with ACRA. This is done through the seamless filing project. This unlocks huge efficiency gains for CSPs as they can now complete the filing without leaving CAS 360.

The April CAS 360 Singapore release will also see some fantastic features, more on that next month.

While this release focuses more on CAS 360 Singapore and CAS 360 New Zealand, the CAS 360 Australia team has been hard at work with improvements to adding emails in document production, improved information hovers for trustee companies, enhancements to trust information in Address Usage report and Trust vesting date being added to the Trust Listing Report.

We have a huge new feature for Australia & New Zealand set to drop in early April, this one has taken a few months to develop, and when you see it, you will know why. Oh, and you will be able to complete Annual Reviews/Returns faster than ever before…

See you in April 🙂 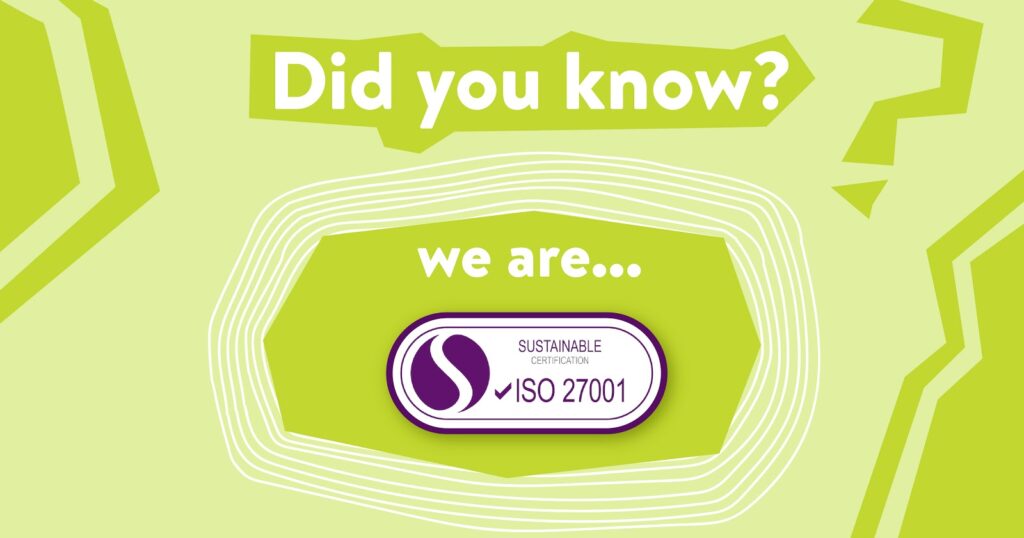 BGL is proud to announce it has received ISO 27001 recertification for the 2021 year. 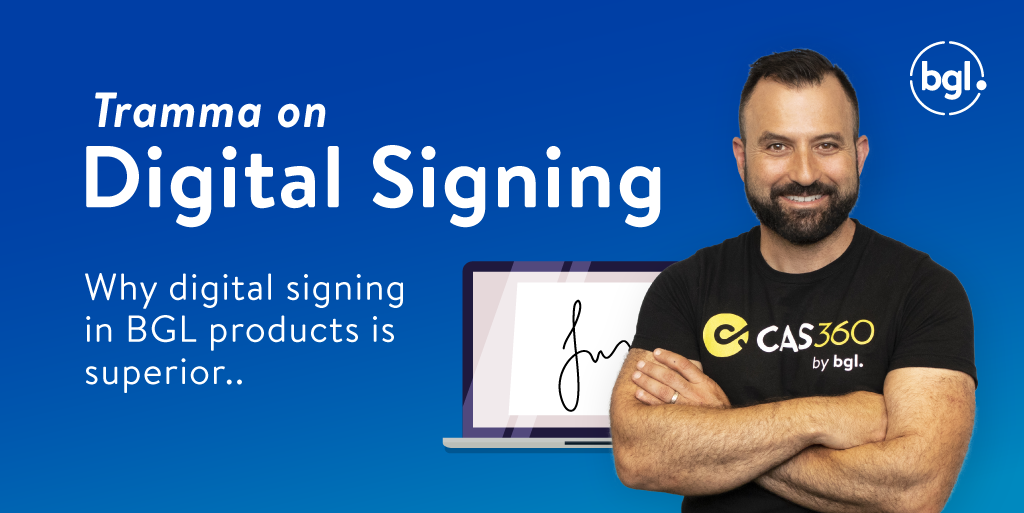 Browsing through various platforms, it has been great to see the discussions around digital signing.

Digital signing in my view, is a must for any organisation where client signatures are required and where the law permits.

As a software provider, it is important to build into the software design and experience a quality engagement piece that brings to surface the true value of Digital Signing.

At BGL Corporate Solutions, we currently integrate CAS 360 (Australia), CAS 360 (New Zealand), Simple Fund 360 and Simple Invest 360 with DocuSign and Adobe Sign and soon to be released, FuseSign by FuseWorks and PleaseSign.

What differentiates these integrations is that they are built directly into the software.

Well, what does this mean? Simple.

We deeply embed the digital signing solution into the software. We mark up the documents and forms, so that when you deliver a set of documents to your clients, they are ready for digital signing. We allow for easy selection of signing and tracking so users can monitor the status

When complete, we notify you and then store the document as required by the governing bodies and make it easy for you to retrieve.

When it comes to Digital Signing solutions, the end-to-end experience is so important and that is what we make great! 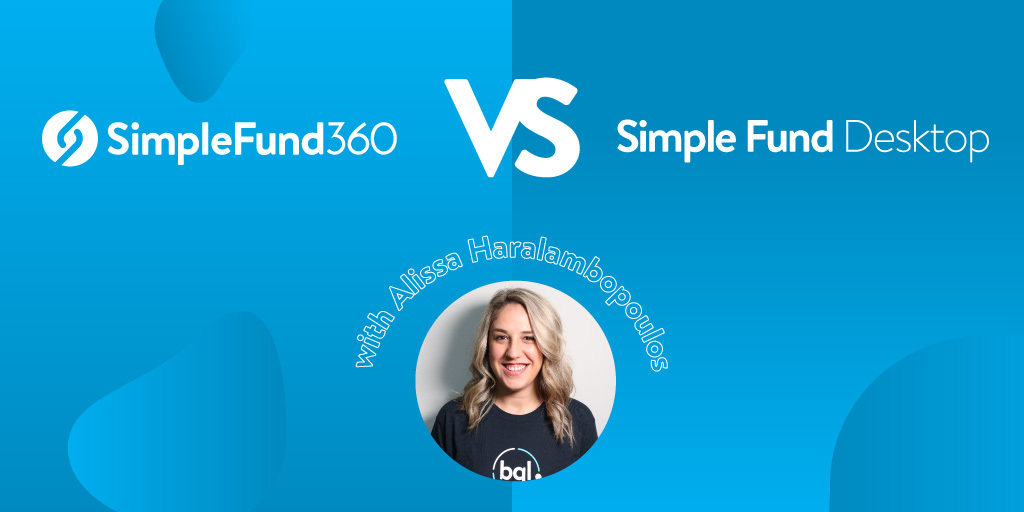 ”Change can be hard, but it’s important to remember that with change, comes opportunity, and when given the opportunity to add value to your clients, and really blow them away, I dare say, that’s a change worth getting behind!

How do you react when you hear the word ‘change’? Does it make you shudder, panic, slip into the great abyss of the unknown? Well, you’re not alone. Change can be scary, it can be time consuming, and it can be costly. But change, like anything in life, can be dependent on the attitude in which you approach it.

When I was working in my previous role as an accountant and the idea of switching from Simple Fund Desktop to Simple Fund 360 came up, naturally I wanted to cling to a product that I had come to know, love, and as far as I knew, was very efficient at using! However, with times changing, and advances in technology happening faster than Covid-19 lock-down restrictions being lifted, this was a change I knew was unavoidable.

As with any change, we went through the process of researching various cloud based SMSF software providers, watching product demos and preparing cost evaluations. Ultimately, the firm made the decision to continue with what had come to be a long-standing relationship with BGL, (even though at the time, Simple Fund 360, was probably the newest entry in the market and didn’t have quite as many features as some competitors – definitely not the case these days), the relationship that had been built with BGL over the years was important.

At first, saying that I was sceptical is probably an understatement. The software looked different, I didn’t know where anything was, and I had to learn how to process from start to finish, with plenty of hand holding from the support team, and numerous Help Articles. Then I had to figure out how to get all my reports together to put into workpapers, that could be reviewed in the same way that we had ‘always done it!’ Needless to say, some processes and reports that we were used to using, needed to be reviewed. Eventually, we were able to come up with a workpaper pack that covered off all the checks we needed to do, to give us peace of mind about what we were providing to not only the auditors, but as an end product to our clients.

During this implementation stage, we worked very closely with BGL. Given the number of funds we were looking after (less than 100), they could’ve looked at us as just small fish in a very large pond, they didn’t however, instead listening to feedback, implementing changes we suggested, and helping us not only understand the new product we were using, but also assisting us to get to an end result that we were happy with. Having worked with other software providers later on down the track, and hoping for the same level of cooperation, or openness to feedback, I can assure you that it’s not common.

Fast forward through this initial stage, and we soon began to look at ways to achieve efficiencies from the product. We started this by putting together an implementation plan, our first focus was Bank Data, and getting all of our clients onboard with this, so that we had up to date data, and could provide quick responses to those sporadic client queries of ‘How much can I contribute… today!’ or ‘How much more can I withdrawal – I’m standing in a car dealership and need to know NOW!’ Once we had bank feeds in place, setting up smart matching rules, made answering these questions on the fly a breeze.

Our next focus was on Data Packs, great for those clients that liked to manage their own investments and did a bucket load of trading. Not only could you generate a report that checked in with all their balances against Computershare, Link Market or Boardroom, but you could also have contract notes attached to each transaction, as and when it came through, rather than having to request all these documents however many months after the fact. Wrap Feeds came into place shortly after, and once we understood the power of the Global Chart of Accounts and set up of Investments, boy was it a game changer! Having data that feeds in, is reviewed in the first fund you process, and then feeds through to any fund with the same investment, think distribution components, and only having to enter these once per investment at the end of a financial year.

“Eventually, our SMSF processing team, found ourselves in a position where, what had once taken us 12 months to get through, was now taking us roughly 6 months, and we had a lot of spare time on our hands (another change!!!)”

So, we decided to use this time to focus on presenting clients their fund performance and current stats in a way that was more engaging than just a set of financials, we reviewed the accounts and found areas where we could add value. We reviewed whether they held Life Insurance, either in their SMSF or elsewhere, and if not, putting them in touch with the right people that could assist them or checking to see if they had multiple super accounts, inadvertently opened over the years, that could all be rolled into one, and actually able to grow their balance for their retirement, rather than being eaten up in fees.

The response and engagement from the clients for this added service that we were able to offer was amazing. Our team was also able to further their learning and expand into various other areas of the business, learning business service compliance, audit, and corporate advisory.

So, to end, whilst this change was initially scary, and definitely not without hiccups and pain points, perseverance, eagerness to learn, and ultimately the passion to deliver a better service to our clients were our driving forces. Change can be hard, but it’s important to remember that with change, comes opportunity, and when given the opportunity to add value to your clients, and really blow them away, I dare say, that’s a change worth getting behind!

If you have questions, please join us for a live 1-hour webinar with our Chief Operating Officer Daniel Tramontana, guest presenter Brett Loney (Superannuation Manager at MKS) and myself on Thursday 11 March at 11:30 AEDT to learn how other BGL clients made the transition! Register now >>>